Today we talk about the museums you can find in Murcia. There are 15 of them so if you’re a fan of museums, make sure you make enough time to see the ones you like. Let me remind you that there is a big info point centre in Plaza Cardenal del Belluga where they can offer you all the information you need about the visiting hours.

General admission to the Tower: 7 €

The museum occupies the old 14th Century cloister part of the Murcia Cathedral and was started at the initiative of Bishop Miguel de los Santos. It opened its doors to the public in 1956 and hosts pieces by thematic sets.

The ground floor comprises Campana Mora, a Sarcophagus of the Muses (2nd Century BC), altar pieces by Bernabé de Modena (14th Century), a gothic altar piece of San Miguel, a Roman sarcophagus box used in 1552 for the body of Gil Rodríguez de Junterón, the Ark of the Holy Thursday Monument and the Custody of the Corpus of Antonio Pérez de Montalvo.

The upper floor has exhibits of the Marriage of the Virgin and the Adoration of the Shepherds by Fernando de Llanos (1516), a reliquary bust of Prisciliano, and Saint Jerome Penitent of Salzillo.

The walk offers you the possibility to see archaeological remains founds in the subsoil.

The museum is one of the most important museums of Murcia and hosts one of the greatest valuable patrimonies of the city. Opened in 1960 exposes numerous religious sculptures, as well as the sculptor’s Francisco Salzillo’s belén (Jesus’ birth scene) of 556 figures

The building itself is a jewellery of the 17th Century in the Baroque architectural style.

Dating from the 13th, 15th and 18th Century, the building has Arabic, flamboyant and Baroque influences. The convent was founded in the Islamic-Mudejar palace of the Murcian emir Ibn Hud, housing nuns since 1365. The building has seen centuries of history and different cultures like Islamic, Gothic or Baroque. An interesting fact is that the museums and the nuns coexist in harmony. 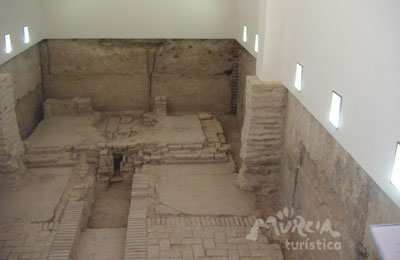 Housed in a 19th Century in the Neoclassic style, the museum hosts the arts of the Murcian painter Ramón Gaya. Among the pieces you can find displayed here there are sketches, posters, literature and an anthological collection, both of his work and of other painters of his generation (Pedro Flores, Luis Garay, Juan Bonafé Cristóbal Hall, Darsie Japp or Windham Tryon). It’s cultural agenda is very wide and often hosts temporary exhibitions.

The modern building of the 20th Century of the Culture House hosts in fact archaeological artefacts. Initially it was built as the Provincial Archives Palaces, Libraries and Museums, due to the efforts of Luis Moya and José Luis León. The museum opened its gates in 1956 and exhibits the most characteristic pieces of the regional archaeology.

The 20th Century building attracts the by-passer through its eclectic style. It is located in the Santa Eulalia neighbourhood, on the old site of the Convent of the Trinidad. After several renovations and adjustments, the museum opened its doors in 1910 and hosts 2 spaces: the Cerdán Pavilion with the permanent collection of the 19th-20th Century arts, and the Contrast Pavilion for the temporary exhibitions.

The Museum of the city is located in the ancient Neoclassic house of the 19th century family López-Ferrer., on the same site where Junterón Tower was built in the 16th Century. The museum shows the history of Murcia and offers often wide cultural events, temporary exhibitions, book presentations and other such activities. 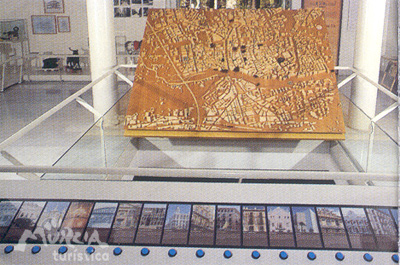 Built specifically for this purpose, the 20th Century building in a modern style was inaugurated in 1996 with a clear purpose: to foster curiosity, bring scientific knowledge closer to the public in a fun and participatory way.

Located in one of the pavilions of the Cuartel de Artillería (Artillery Barracks), the aquarium belongs to University of Murcia and was opened from the desire to bring the general public closer to the marine environment.

It contains 2 floors where you can enjoy a tour among the most characteristic tropical and Mediterranean marine ecosystems. On the tropical side you can discover aspects of Red Sea, Indian Ocean, Pacific Ocean, and Caribbean Sea with reef sharks, angelfish, rays, moray eels or live corals. The Mediterranean area houses from the superficial areas anemones, salps, juliae, sole to deeper areas with bottom sharks, dogfish.

The River Mills Museum is one of the largest milling complexes in Europe is located on the river Segura. It is a facility rehabilitated in 1989 by the architect Juan Navarro Baldeweg as the Hydraulic Museum. It preserves the machinery and parts of twenty-four mills. The Sala Caballerizas has temporary exhibitions. The building itself had different evolvement stages from 18th to 20th centuries, and baroque and contemporary architecture styles can be seen combined.

A permanent exhibition, it offers the visitor the possibility to admire the passionate sculptural work of renowned artists from the 17th to the 20th centuries, as well as embroidery, clothing, goldsmithing, metalwork, musical instruments or ornaments.

Among the most renowned sculptors are Nicolás de Bussy (1650-1708), an outstanding forerunner of the Murcian Baroque school, with his masterpiece "Santísimo Cristo de la Sangre" (1693). Roque Lopez (Era Alta, 1747 - Murcia, 1811), a favourite disciple of Francisco Salzillo and the most relevant follower of his style, he shows in works such as "La Samaritana", with salzillesque features of Christ stand out, and the beauty and elegance of the woman dressed in the style of the 18th century.

Among the most popular festivals in the city of Murcia there is the one of Moros y Cristianos, hence the festival committee decided to create a specific museum to bring the visitor closer to it. Here costumes of the different kábilas and mesnadas that parade annually at the Festival are exhibited, as well as official posters in its more than 30 years of existence.

Since 2003, the University Museum, located in the Cuartel de Artillería building, has shown the public a series of objects of a technical, scientific, artistic or cultural nature that, for the most part, had become obsolete for teaching. The building has a technical area for the conservation, cataloguing and registering the objects that make up the centre’s stable collection, with just over 3,000 pieces. The Museum has the "José Nicolás Almansa" Room where it holds temporary exhibitions of all kinds. The Museum also participates in seminars, courses, and conference cycles.

Located in the old warehouses for railway materials, it is accessed by crossing the platform of the Carmen Railway Station along the tracks.

The exhibition is divided into three rooms in addition to the entrance in which an old railway station is represented.

In the first room: two models, the oldest at H0 scale and the other handcrafted, a large number of railway objects such as telephones, heaters, signal lamps, etc. are exposed.

In the second room: a Marklïn scale model H0 and an Ibertrén scale N; all the models are decorated and set with a railway environment and scale reproductions of buildings, some real, such as La Estación del Carmen

The display cabinets show ancient and curious documents, as well as tools, period costumes and reproductions of trains from the steam railway to the present day.

In the outer access garden, it shows other railway pieces such as discs, needle pots or poles. 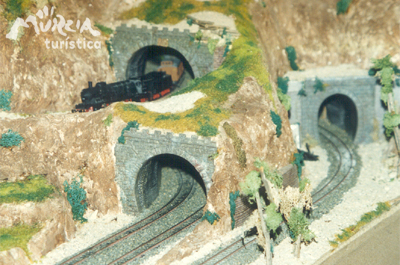 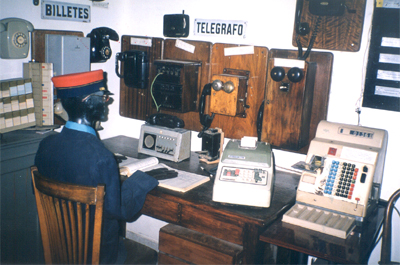 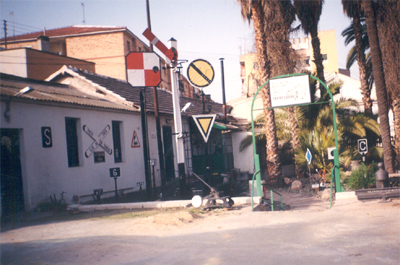 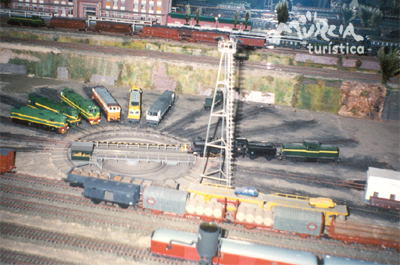 Just in the outskirts of Murcia you can enjoy the Nativity Scene of Puente Tocinos. This house-museum is located in the Town Tower House, better known as the Clock House, a 18th Century building. The crafts of the Nativity Scene are promoted and disseminated with local works and artists but of great national prestige. It should be noted that Puente Tocinos has always been known for its nativity scene tradition.